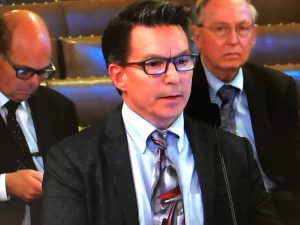 In Today’s Courier, they are reporting on a complaint that was filed against James David Faul aka Jim D. Faul for submitting false export volumes to the City of Beverly Hills in violation of the Legislative Analyst Ordinance.  The ordinance has penalties and consequences for providing false or misleading information to the City of Beverly Hills.  Mr. Faul is employed by LC Engineering based on Thousand Oaks.

Victoria Talbot, tirelessly covers the news for the People of Beverly Hills.  Here is here story:

Here is the filed complaint:

Last night at the City Council Formal Meeting, staff reported on the results of a peer-review of the estimated cubic yards of export for the projects. A third-party review was provided as a result of the findings of an expert hired by resident Debbie Weiss, which showed that Faul’s export figures were incorrect.

The developer was aiming for a by right project with less than the threshold of 1,500 cubic yards of export that would trigger an R-1 Permit Review.

Richards alleges that Faul failed to follow an Irvine Geotechnical Report recommendation dated March 21, 2017 that “instructed the Applicant to remove 200 cubic yards of soil from the site.”

“It is our understanding that the trims will be shown on the revised civil engineering plans to be submitted to the Community Development and Building and Safety Departments. According to the project civil engineer, Jim Faul with LC Engineering Group, the slope trimming on 11939 Loma Linda property will create 200 cubic yards of earth. The 200 cubic yards generated from the slope trimming should be exported from the site and included in the export volume calculations,” said the report.

Faul repeatedly sent calculations to the City with figures below the 1,500 cubic yard threshold, despite this direction, alleges Richards, from the sixth round through the most recent 11th round of corrections.

He also alleges that the retaining walls were “falsely labeled” as “terraced planters,” a distinction that was explored at Tuesday’s City Council meeting. At the meeting, resident Anne Ostroff presented her findings on the “terraced planter” which City Staff labeled as a part of the structure.

In a spectacular expose, Ostroff peeled back language that disguised a retaining wall as a planter, and a part of the building’s structure, that enabled a 20 foot extension off the level pad, thereby increasing the size and impact of the project significantly.

Susan Healy Keene, director of Community Development, says that the City does not have access to the “Auto Cad” files, which were used to determine the export values on the project. “Because we check plans based on calculations provided by a licensed professional engineer.  There are multiple software programs that could be used to obtain the calculations.  We don’t validate the input; we validate that the result of their calculations matches the design on the plan,” wrote Keene in an email.

The complaint was submitted Wednesday evening and Richards has asked that the City Prosecutor review the charges and file a complaint.