As reported in the Beverly Hills Courier, 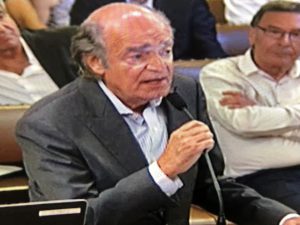 Holdings Ltd., claiming that Gardner supplied false information on his Legislative Lobbyist Registration and Hearty, the complaint alleges, aided and abetted him in “perpetuating false information.”
The formal complaint was filed Friday afternoon with Beverly Hills City Clerk Byron Pope by Ronald Richards, a resident attorney who has been actively opposing over-development in the Hillside area of Beverly Hills.
Legislative Advocates are required to register with the City to provide a measure of transparency in City Hall and the registration forms ask for the Legislative Advocate’s employer, address and contact phone numbers. Gardner is registered as an employee of Allen Matkins law firm.
As reported in Friday’s paper, when called at Allen Matkins at the phone numbers provided, the operator was unable to find Sherman Gardner’s name as an employee. He is also not listed on their website.
The City’s Legislative Advocate registration form is a legal document and filed under penalty of perjury.
Richards claims that Gardner is guilty of lying about his employer, Allen Matkins, his work phone number, his fax number, his office address and his client. 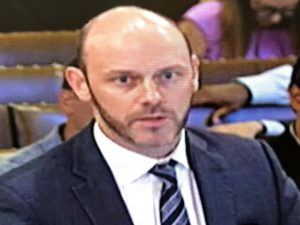 His client, according to an email from Alan Hearty to Ronald Richards, is Allen Matkins.
In a letter from Richards to Gardner, Richards asked if the information was accurate, and explained that phone calls to Allen Matkins showed that they had no record of his employment there.
“This leads me to the conclusion that your affirmation that you work for Allen Matkins is false…”
Surprisingly, Alan Hearty responded in lieu of Gardner.
“Although your inquiry… does not warrant a response, please be advised that Mr. Gardner is a consultant who has been retained directly by our law firm in connection with the matter for which he is registered as a lobbyist, and his business address for the purpose of this representation is correct.
The complaint includes a letter from Richards to Hearty, asking for clarification and explaining that “if you hired him [Gardner] as a lobbyist… than you are his client.”
The Legislative Advocacy forms are available on the City’s website at http://www.beverlyhills.org.

A copy of the complete complaint can be viewed here:

Complaint Against Hearty and Gardner

Here is a link to a video of Sherman Gardner appearing before the parking commission referring to a current councilman as his “good friend” on September 1, 2017.

Video of Sherman Gardner Appearing before the Parking Commission

Mr. Gardner then appeared again in front of the Parking Commission a month later on October 6, 2016. This time it was revealed that he received a special disposition and the City removed the limited day two hour parking in front of his house and replaced it with two hour parking at all times.

Here is a link to that video:

Here is a link to a video of Sherman Gardner appearing before the planning commission on June 30, 2017 misrepresenting the Loma Linda matter’s project size as one house being built by a person.

Sherman Gardner before Planning Commission on 6-30-16

Here is a link to Alan Hearty followed by Sherman Gardner addressing the City Council on August 13, 2016.  Mr. Hearty spends his time talking about a project in Malibu and deviling a local resident as he typically likes to do.  Then Mr. Gardner shamelessly invokes Frank Fenton’s name to argue fairness.  Yet, who was he working for in August of 2016?  Was he shadow lobbying then?  He spoke against the ordinance but for the “Trust”.  As we know now, a Trust is not relevant but the Trustee is who is relevant.  Mr. Gardner was pretending like there was a human person attached this project.

Hearty and Gardner appearing before City Council on 8-13-16