It is hard to believe but just when I thought store fronts had no legal right to exist, along comes People v. Baniani, G048535.  A copy of which is you can read here:  Baniani Opinion.  The independence of Justice Moore and his panel, Justice Aronson and Ikola has long appreciated by the defense bar. 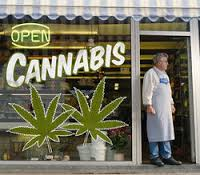 Here are the facts of this case:

In March 2010, Elijah Hayward worked as an undercover narcotics detective with the Newport Beach Police Department. Using a fake name and driver’s license, he visited a physician and obtained a recommendation to use medical marijuana.

On March 23, 2010, Hayward went to a two-story business building located on Campus Drive, based on information a marijuana dispensary was located there. He went to an office on the second floor. On the door was a sign that stated, “by appointment only.” Hayward knocked and saw someone peek through the blinds. A male in his 20’s, with dark hair and an olive complexion answered the door. The male said his name was Sean, and invited Hayward in.

When Sean returned, he showed Hayward into another room. This one contained a countertop and two refrigerators with clear, glass doors. There were a number of jars of marijuana on display and a dry erase board on the wall. Hayward said the board contained the names of different strains of marijuana and their prices. Hayward told Sean he wanted an eighth of an ounce of one of the strains. Sean weighed it out and Hayward paid him $60. Sean placed the container of marijuana in a bag and gave Hayward a marijuana cigarette and a small brownie, neither of which had Hayward requested.

Mack entered the office and asked defendant what business was run at the location. Defendant said he operates a property management and real estate investment company, Advantage. He added he also runs a marijuana dispensary in Costa Mesa and he uses the Advantage office as a storage facility.

Defendant started a medical marijuana collective, Herbal Run, because he had an uncle who passed away from pancreatic cancer. It was not defendant’s intent to sell marijuana, as the collective is a nonprofit entity. Prior to creating the collective, defendant consulted with Attorney Stewart Richlin.

Richlin, who also testified, drafted the collective’s bylaws, reviewed state laws and the Attorney General’s Guidelines with defendant, and filed the nonprofit articles of incorporation for Herbal Run. Additionally, defendant acquired a State of California Board of Equalization seller’s permit. His first indoor marijuana “grow” was with three other members of the collective in August 2009. Shortly afterward there were 10 members in the collective. Prior to becoming members the individuals were required to sign membership contracts drafted by Richlin.

Defendant invested money into the various “grows.” He was not attempting to and did not make any profit off the “grows.” The “grow” that resulted in the marijuana seized in April 2010, was the result of indoor and outdoor “grows.” Those “grows” belonged to everyone in the collective, but Steven Sonders and an individual named John were the actual growers.   Defendant described the intake procedure whereby an individual may join the collective. Herbal Run’s Web page did not have a street address on it. Neither did its business cards. To join the collective, individuals would call the telephone number on the Web site or business card.

A member of Herbal Run would then take down the individual’s information, including name, address, identification number, and the recommending physician’s name and telephone number. The recommendation would then be confirmed with the recommending physician before an appointment was made for the individual to come into the office. At the appointment, an Herbal Run member would review the bylaws with the individual and find out what the person could contribute to the process. Individuals who refused to contribute were not permitted to join.   In April 2010, Herbal Run had 70 to 75 patients. Defendant asked members to donate either time or money toward the “grow.” When asked what activities the members contributed, defendant stated: “Everybody would put together, if they can help with the grow, if they had any experience with the grow, if they can just water the plants or trim or make butter or cook cookies.”

All the applicants were required to give time to the collective, but those who could not physically contribute to the cultivation of the plants donated money. Defendant said the three-ring binder seized by the police is a log of the money donations made to Herbal Run. The log notes show whether the person making the donation was from a delivery or from “a walk-in,” someone who called first and then made an appointment. The reason prospective members had to make an appointment was because a member needed to be present to process the application and members were not always there. Individuals were not permitted entry without having first made an appointment.   Defendant trained members who handled new patients. He specifically trained them to explain to an applicant the requirement of contributing time and effort. Defendant said he was not present on March 23, 2010, when Sean and Hayward engaged in a transaction.

Defendant was visiting his grandmother in Iran. He added the two-page document Hayward said he signed was “not [a] complete document.” Defendant said he did not find the two-page document Hayward said he signed. Defendant retained all his “patient” records. There was no record from March 23, 2010, and Sean never told defendant about the transaction. Sean should not have permitted an individual who had not gone through prescreening to enter.   Defendant explained the prices on the dry erase board were for patients who could not contribute their time because they were too sick and who would prefer to pay. The amount was based on the expenses claimed by the growers. Defendant does not keep any money from monetary donations; that goes to the collective’s growers to reimburse them for their costs. Defendant said he did not believe the growers were making a profit and he never attempted to make a profit.   Other members of Herbal Run testified about the requirements for obtaining medical marijuana from Herbal Run. Each testified to donating time or experience in exchange for medical marijuana.

Prior to the second trial, the prosecutor brought an Evidence Code section 402 motion to preclude defendant from asserting a defense under the MMPA. The defendant argued he did nothing illegal because he was a qualified patient whose physician recommended his use of medical marijuana, he formed a medical marijuana collective, Herbal Run, and operated the collective in compliance with the MMPA and the Attorney General’s Guidelines. Specifically, he claimed his actions were protected under section 11362.775 of the MMPA and that section 11362.775 does not preclude the exchange of money for medical marijuana when the money is used to cover the costs of cultivation. The district attorney argued sales are not protected by the MMPA. He also asserted the MMPA did not apply because Herbal Run was a for profit organization. The court held defendant was not entitled to the benefit of the defense because there was evidence he charged for the marijuana. Consequently, defendant was precluded from presenting evidence on the defense and the jury was not instructed on it. Defendant claims the court prejudicially erred.

The Court of Appeal which sits in Santa Ana reversed the conviction.

The Court used an amendment by the state legislature to justify its holding.  In 2010, the Legislature added section 11362.768 to the MMPA. (Stats.2010, ch. 603, § 1.) This section implicitly recognizes the lawfulness of a “marijuana cooperative, collective, dispensary, operator, establishment or provider who possesses, cultivates, or distributes medical marijuana pursuant to” the MMPA, but prohibits such entities from operating “within a 600–foot radius of a school.” (§ 11362.768, subd. (b).) “This section shall apply only to a medical marijuana cooperative, collective, dispensary, operator, establishment, or provider that is authorized by law to possess, cultivate, or distribute medical marijuana and that has a storefront or mobile retail outlet which ordinarily requires a local business license.” (§ 11362.768, subd. (e).)

That the Legislature intended such a result is further evidenced by its subsequent enactment of section 11362.768. As noted above, this section implicitly recognizes the lawfulness of a “marijuana cooperative, collective, dispensary, operator, establishment or provider who possesses, cultivates, or distributes medical marijuana pursuant to” the MMPA, and only prohibits such entities from operating “within a 600–foot radius of a school.” (§ 11362.768, subd. (b).) If such activities by patients and primary caregivers were unlawful altogether, there would be no need to enact a statute prohibiting such entities only within 600 feet of a school.

The Court of Appeal clarified that the MMPA does not require all the members of the collective or cooperative to actively participate in the cultivation process and their contribution to the organization “may be limited to financial support by way of marijuana purchases from the organization.

In the present case, there was evidence defendant had a physician’s recommendation to use medical marijuana, he started Herbal Run and set it up as a not for profit corporation, he acquired a sellers license from the BOE, he did not make a profit on marijuana sold to qualified Herbal Run patients, and the money provided in exchange for marijuana was given to the growers to reimburse them for their costs.  The Court held that this evidence raised a reasonable doubt as to the application of the defense.  Defendant was therefore entitled to a defense under the MMPA.  Whether Herbal Run was operated for profit or not, would then be determined by the jury.

The Court of Appeal specifically rejected this contention.  The stated the following:

The MMPA does not impose this limitation on qualified patients.

First, the purpose of the MMPA is to ensure the promise of the CUA is fulfilled and qualified patients have safe access to affordable medical marijuana.   The Court of Appeal specifically rejected the notion that a patient can’t just buy their marijuana and that is their only participation.   It is a brand new legal ball game now as a result of this opinion.  Here is the what the Court said:

“We do not think the Legislature intended a seriously ill individual whose physician has recommended use of medical marijuana, and who is physically or otherwise unable to participate in the acts involved in cultivating medical marijuana, cannot simply pay money to his or her collective in exchange for the recommended medicine. It would be cruel for those whose need for medical marijuana is the most dire to require that they devote their limited strength and efforts to the actual cultivation of the marijuana, and then wait months for it to grow so they can use it, or to require that they make their monetary contribution and then wait months for the marijuana to be planted, grown, and harvested before they may lawfully be provided medical marijuana. Moreover, for some the cultivation and processing would not be completed until it was too late to provide any relief. The MMPA does not anticipate a patient who has received a physician’s recommendation must thereafter wait months to lawfully acquire medical marijuana.”

The Court of Appeal concluded by saying that “given the MMPA’s purpose, one provision in the MMPA implicitly recognizes the legality of store front dispensaries, collectives or cooperatives (§ 11362.768), and another provision specifically provides a defense to violation of sections 11360 (sale or transportation of marijuana) and 11359 (possession of marijuana for sale), we conclude a member of a collective or cooperative may purchase medical marijuana from the collective or cooperative so long as the sale is not for profit.

Now if this opinion is not depublished or the California Supreme Court does not grant review, it will be a sea change in medical marijuana law.